It w.asn’t even a hurricane when it did most of its damage.

Seven years ago today, Oct. 29, 2012, “Sandy” hit the northeast U.S  In Bridgeport, an unprecedented 11 foot storm surge was recorded.  In New York City it was 14 feet.  Total losses came close to $70 billion, the fifth costliest Atlantic hurricane ever.  (For comparison, the top storms of Katrina and Harvey totaled $125 billion.)  At its peak it was ‘only’ a Category 3 hurricane, but what it lacked in wind speed it made up for in sheer size, measuring over 900 miles in diameter at its peak.   It claimed 147 lives and extended from the Caribbean to Canada.

It took an unusual westward direction and, when it made landfall in New Jersey and arrived at high-tide that was maximized by a full moon.  Record rainfall was recorded in many areas, even electricity was out in areas, some as far west as Indiana and Illinois. 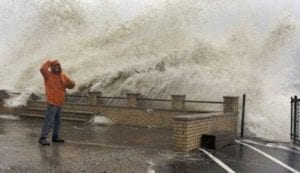